[UPDATE: The founder of this company (who is discussed in Part 2) jumped shipped in 2013. With his horrendous track record, it is a safe bet that a large amount of people will never get their money back. Consider it effectively stolen. But don't worry, because he started yet another company! It's way easier to scam people if you do it fresh each time.]

In earlier posts, I talked about the brilliant books by Florent Gorges and Isao Yamazaki, The History of Nintendo - Vol. 1 and The History of Nintendo - Vol. 2. I also mentioned if you wanted to buy these books, why you should avoid the publisher (Pix'n Love Publishing) like the plague. Get the books from Amazon, eBay, or some other reputable site. Here's why in one sentence:

They've stolen money from a lot of people.


Pix'n Love is based in France, and has practically no ability to deal with international business. If you go to their english Twitter, Facebook, or official website, you will find it is poorly maintained and rarely updated. If you go through the comments of their Facebook posts, you will find a majority of people that have placed both orders and pre-orders, only to never hear from the publisher again. Pix'n Love has no issue with taking your money, they just won't deliver. It isn't like Amazon, where you're charged once your order actually ships. Your card is charged as soon as you make that order/pre-order, no questions. Refunds are sluggish (if they ever happen at all). People contact Pix'n Love multiple times in every way possible, only to run into a brick wall. Apparently, they only have one english translator, who is not involved in any of the actual business side of things. He only relays the messages, which are simply ignored.

The excuse you will find littering their posts is something like, "We are a small publishing company based in France. We are still figuring out all of the intricacies of this business." I could see that statement working maybe once, but it has become their company mantra. What's worse, it's a bald-faced lie. It is infuriating if you check out their French website, because they are cranking out books like clockwork (seriously, see the bottom of this post). What's really happened is that they figured they could jump into the international market, found out it's not that easy, and just gave up. But don't worry, they decided to keep all the money they've already received. Even if you order and pay for the books that are already out (e.g. History of Nintendo - Vol. 1), you still won't get them.

The three books people have been waiting for the most are The History of Nintendo - Vol. 3, the Gunpei Yokoi biography, and The History of Mario. Pix'n Love announced pre-orders for the Yokoi and Mario books. Years ago. And started taking money for them. Years ago. They stated they were already done, going through the final touches, and ready to print. Years ago. People have been sitting with their wallets down cash and their thumbs up their asses waiting. For years. Any updates from Pix'n Love? Not really. Once all the negative reception started heating up, they just started ignoring everybody. All their regular posting stops right around the end of 2012. Even on their official website, the availability for the Yokoi and Mario books were at "Sep. 2012" up until maybe a month or so ago, when it changed to simply "TBA." 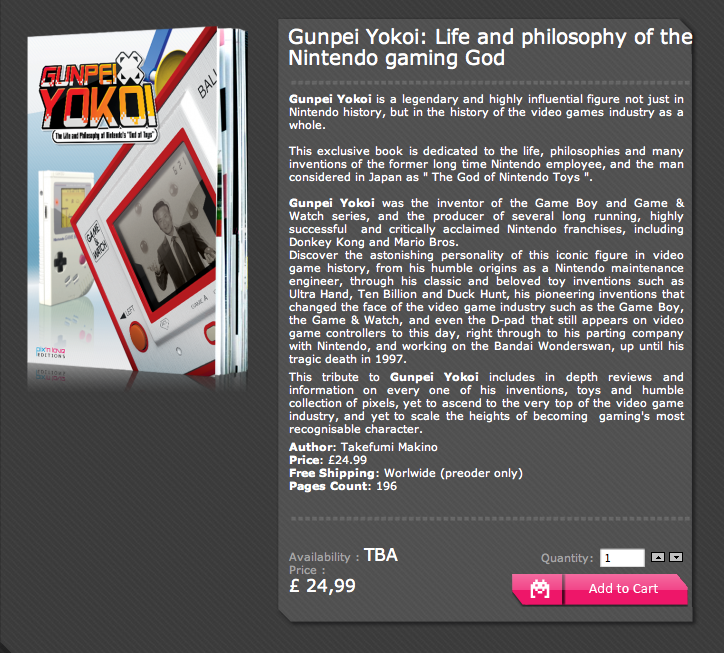 They also did a History of Sonic and Devil May Cry book, but what they decided to do was jump the printing queue with these since they had official support and collaboration with SEGA, Capcom, Ninja Theory, and UDON. Even though they were written, edited, and translated after the three aforementioned books (and after people had already paid for them), Pix'n Love decided to deliver the Sonic and Devil May Cry books first due to official support. I would assume a large part of it is that SEGA, Capcom, and UDON handled a lot (if not all) of the international business stuff themselves. If they hadn't, I doubt they would have been released outside of France at all, since Pix'n Love is so inadequate. And a lot of their posts are things like, "We really want to release these books so badly." I guess they just assume that everyone in North America is a total moron.

They're acting like it's someone else's fault. Um, the release of these books is up to nobody but you, Pix'n Love. If you "really really want to release them," then start making it happen instead of shirking responsibility and whining like a child. They also state that they're trying to make the purchase price lower, because international costs and all that. I understand that, but you already took people's pre-order money. Do you understand what a pre-order is? It's when you say, "This is what it costs. When you pay $X.XX amount, you get the book." Your statement of trying to figure out how much it's going to cost after taking pre-orders is one of the most idiotic things I've ever heard. 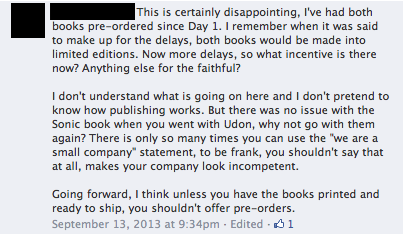 If you type any of the book titles into any search engine, results are praising the hell out of the books that have been translated, and announcing the imminent release of others. It's because the books are really freaking good, but nobody goes farther in-depth about Pix'n Love's business practices. The sites are just going off of the empty promises Pix'n Love has been making and leaving it at that. Most of the relevant articles are also from circa 2012, further giving evidence that Pix'n Love just stopped giving a shit for their international customers. If they would just announce that they're not releasing any books outside of France, then at least that would put the matter to rest. Instead, they've decided to drag a ton of hopeful buyers along behind their train of crap for no reason other than to keep those buyers' money. If they announced the books officially cancelled, then they'd have to refund them. Oh no!

I would admit fault if Pix'n Love actually released all the stuff they've been promising for years. Even on the inside cover of The History of Nintendo - Vol. 1, it states that "coming very soon" are The History of Nintendo series all the way up through Volume 4, not to mention the Takahashi Meijin and Gunpei Yokoi biographies. It's just so frustrating that these brilliant books are being handled by the most incompetent publisher ever. If I was Gorges, Yamazaki, or any of these authors, I'd be super pissed that all my hard work is only reaching a percentage of people that would absolutely love to read/purchase it. Many posts on Facebook are people stating that they'll put up with practically anything in order to get these books because they want them so badly. Pix'n Love is taking that to heart, using it as admission to take their money. I feel so bad for these people, because they're practically brainwashing themselves.

It's so frustrating, because going through their French site, they know what they're doing, and they're really good at it. They just can't do the international side to save their life. So don't even tempt us with empty promises, you pieces of garbage. Or hire another company to take care of that side for you (e.g. The History of Sonic) if you really want to release your books in other languages and countries (as you repeatedly state you do). The fact that we don't have these books doesn't bother me as much as the fact that you take people's money and then do nothing but repeatedly apologize and avoid the issue.

Bottom line, if you want any of the few really good books that have been translated, get them from Amazon, eBay, or somewhere else where you know you'll get what you're paying for. And for everything sacred, do not order anything from Pix'n Love directly. You might as well rip your money up right now. Oh, and if you were planning on pre-ordering The History of Mario on Amazon, apparently it has been removed entirely from that site, which is just another sign that it's never going to happen over here.

Are you telling me you don't have the capital or ability to do more (or at least get things moving), Pix'n Love? Because when I check out your French site, I see things like this: 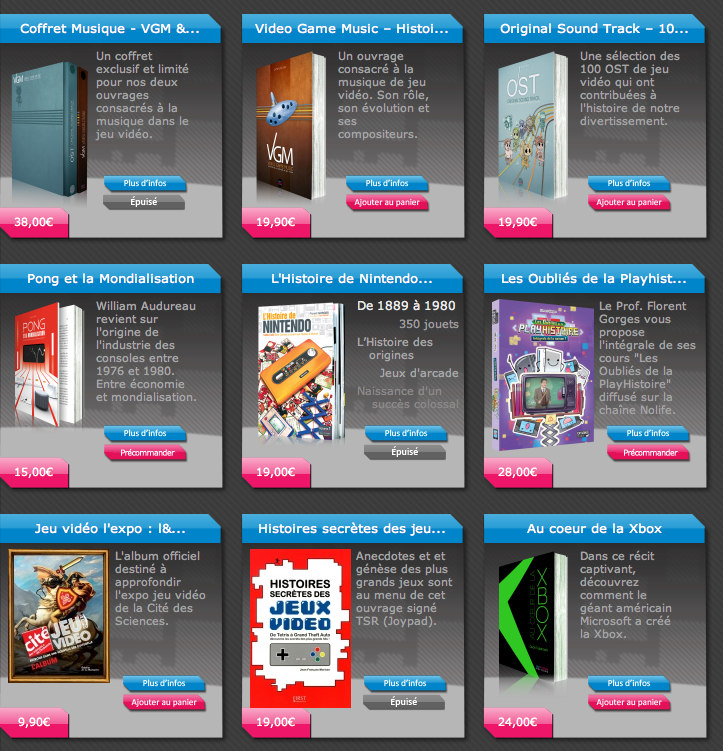 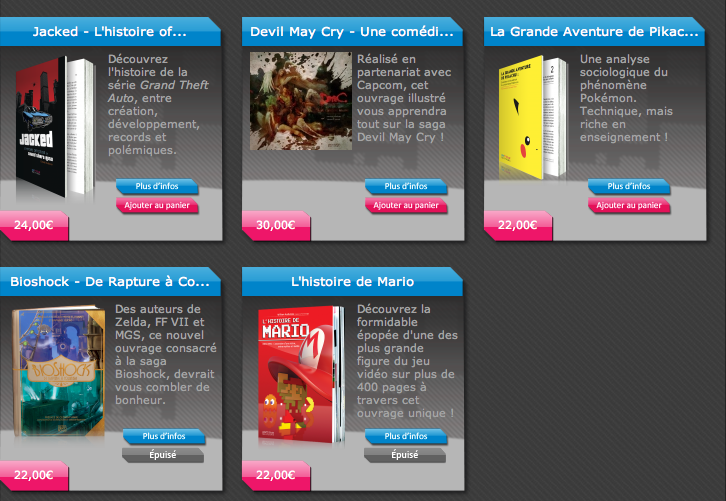 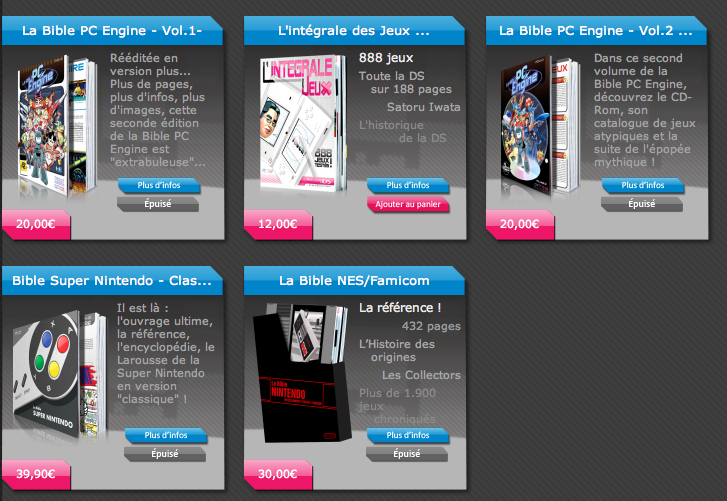 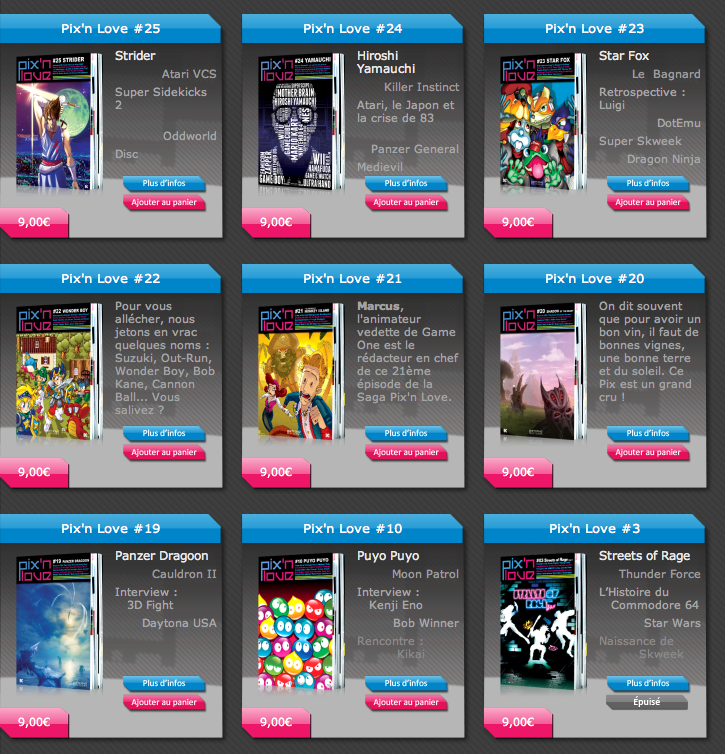 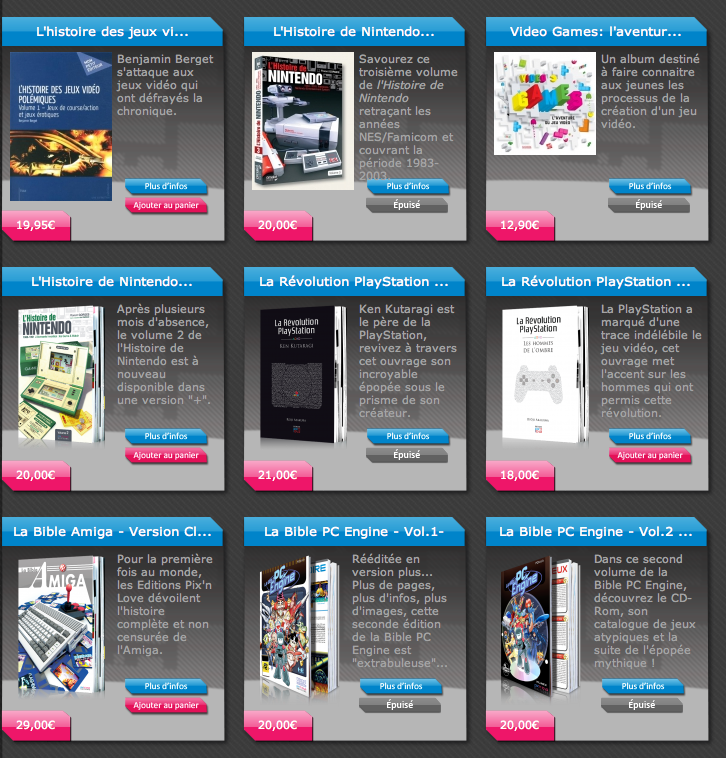 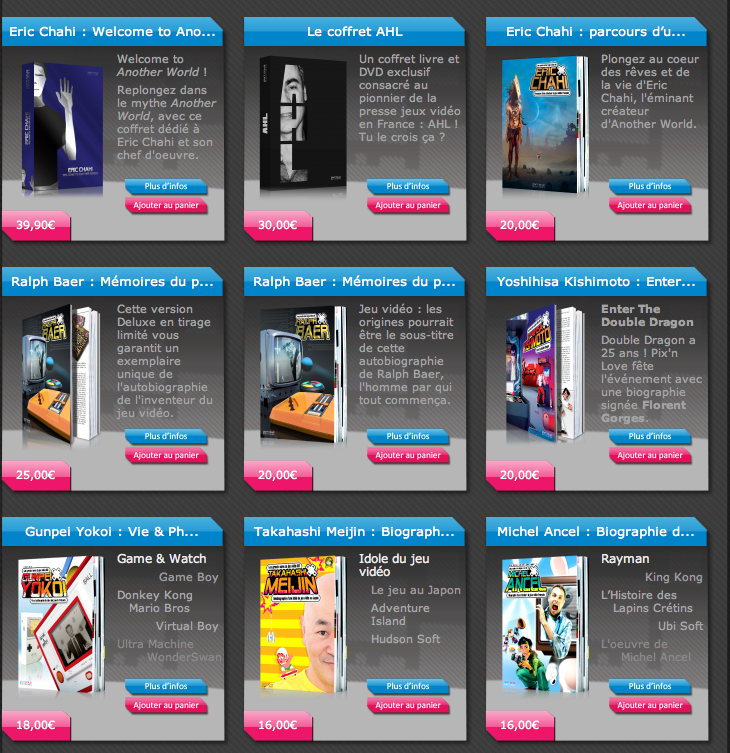 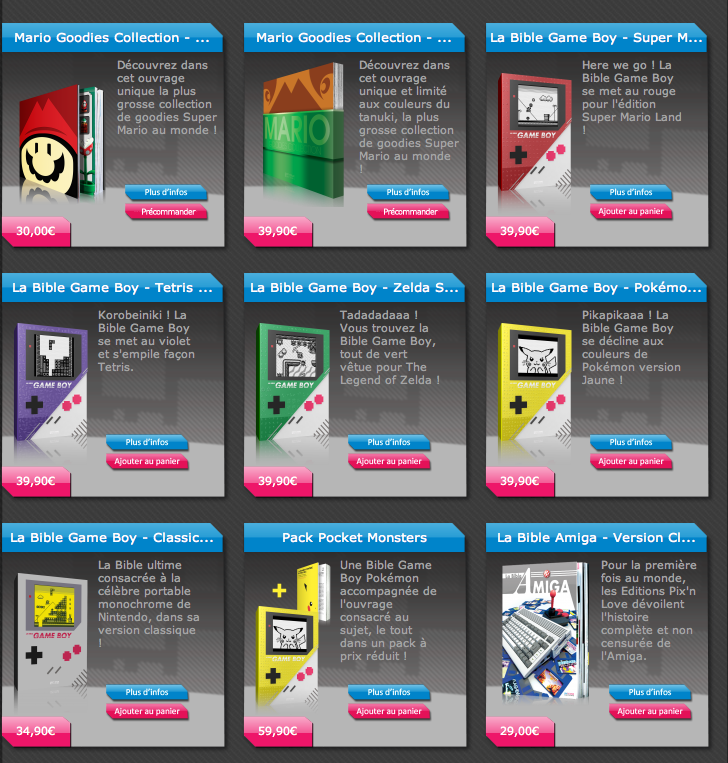 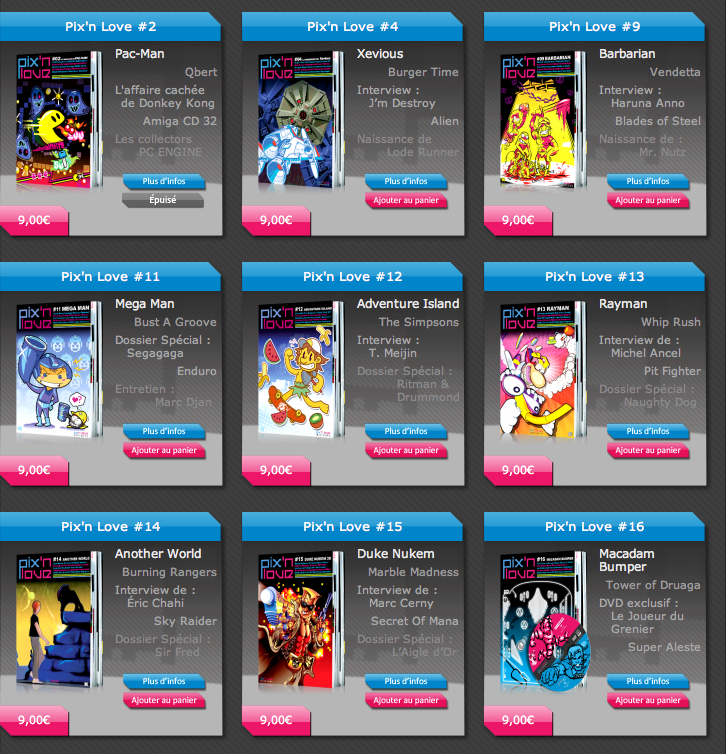 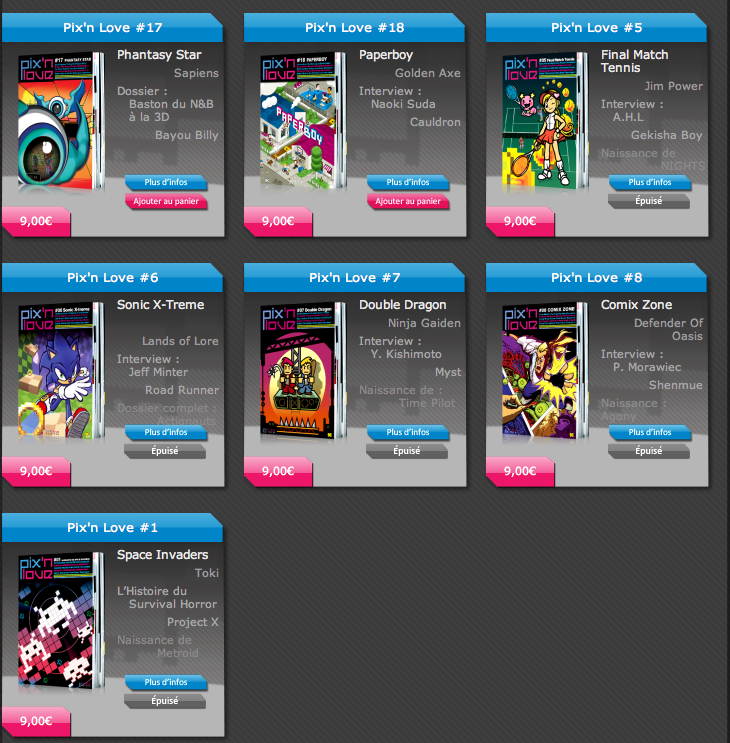 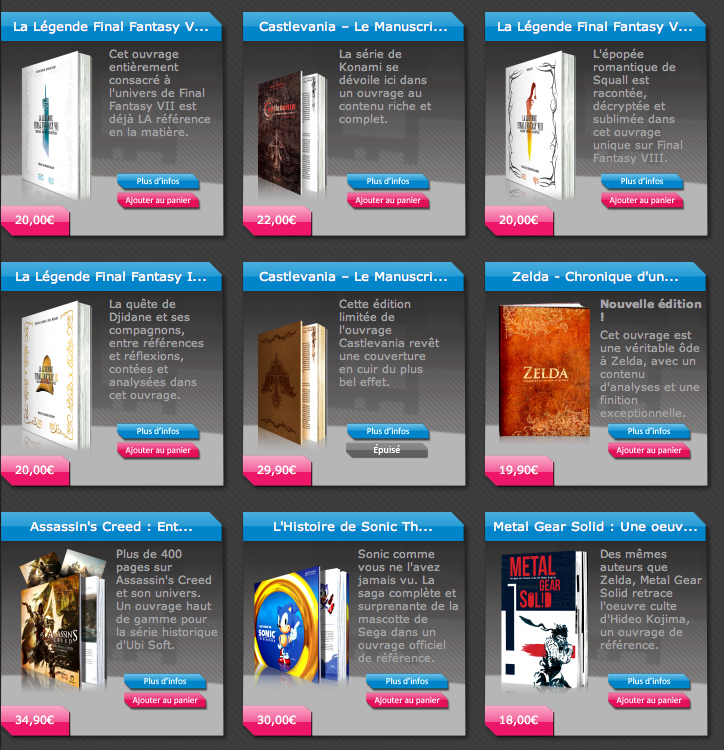 But it's good to know that your numerous statements about caring about getting a measly two repeatedly delayed books to us are truthful, and you're really trying your hardest. Thanks, Pix'n Love Publishing!